Damugnezz - gio mar 03, 2011 5:18 pm
- gio mar 03, 2011 5:18 pm #195014 direttamente da screamscape , ecco la risposta del parco in merito alla questione :
Here is the statement from the park below…
“…part of what makes Cheetah Hunt such an amazing addition is its use of an interaction with existing park elements. To make that happen, of course it has been necessary to make major changes to several park landmarks like Rhino Rally, the Clydesdale Hamlet, the Crown Colony and the Monorail Station.
Some of the more subtle changes include raising the floor in the Monorail Station, cutting back the waterfall outcropping in Rhino Rally canyon and moving some of the Serengeti Express’ train tracks. Some of the more major changes – many of which are immediately noticeable to guests in the area – that are taking place include building new guest bridges and pathways between Nairobi and Edge of Africa, building a seating terrace in front of the Crown Colony, replacing the Clydesdale Hamlet’s wooden stalls with secure “bedrooms” for the cheetahs, and, indeed, lowering certain Skyride towers near the area where the track “jumps” the cable.”

Living in the middle of the Magic! 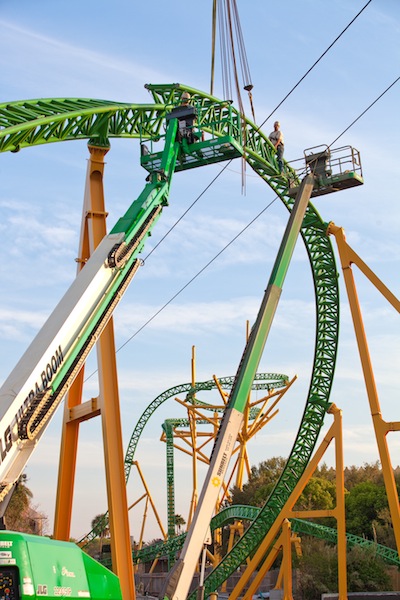